You are the owner of this article.
Edit Article Add New Article
Welcome, Guest 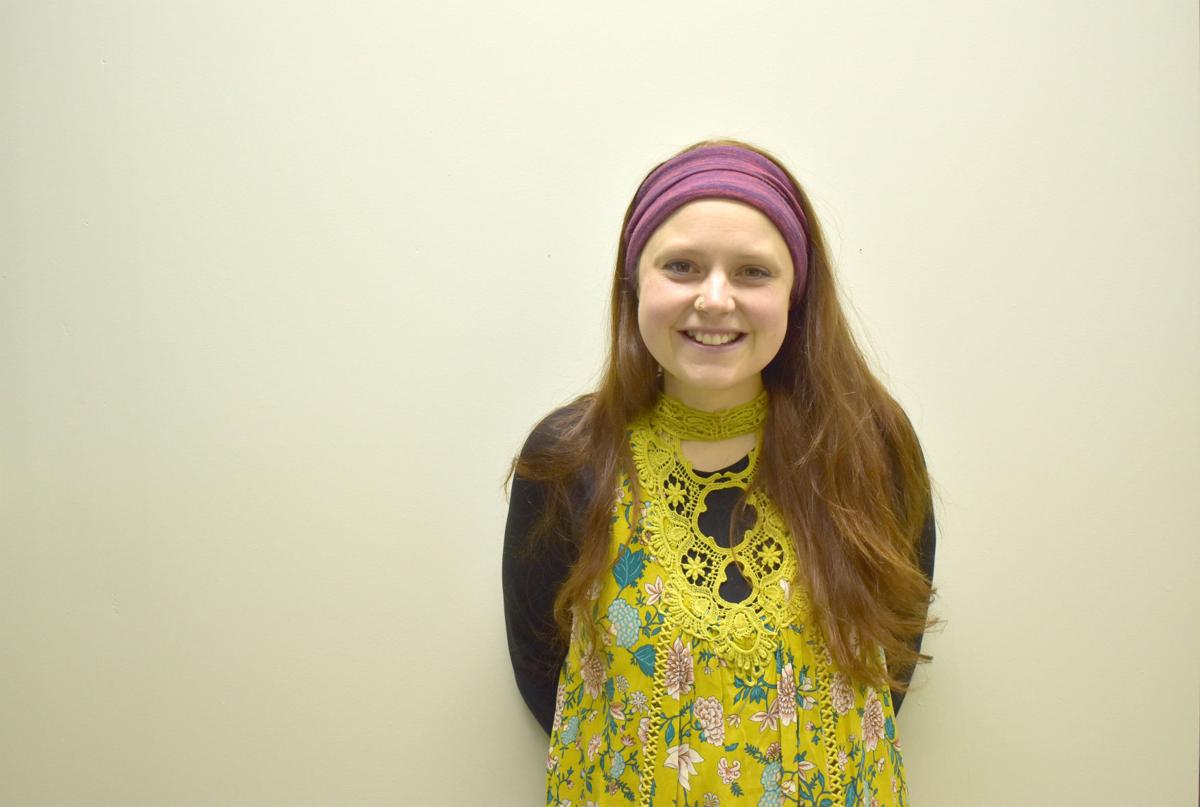 Visual storyteller: Laura Korynta is the final Hinge Arts artist in residence for the Summer/Fall 2019 cohort. She is a visual artist with a unique focus on visual storytelling including puppets, dioramas, paper sculptures and crankies. 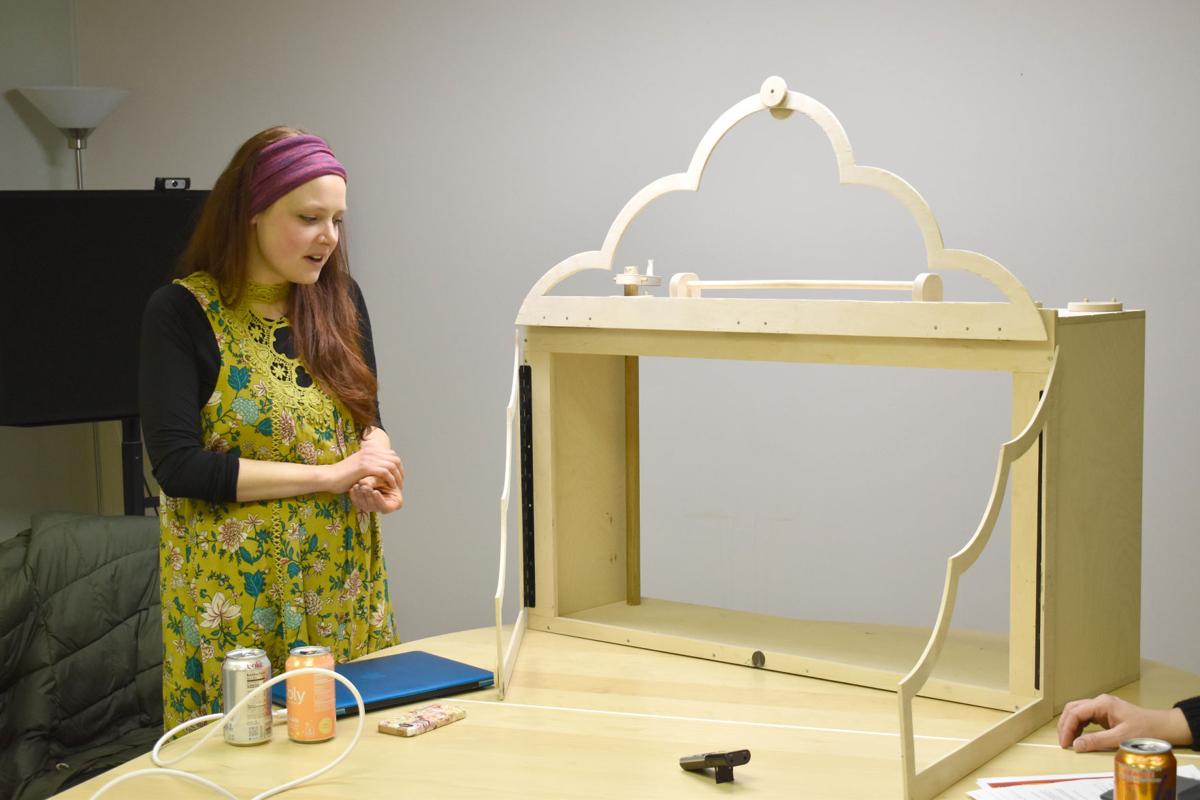 Moving pictures: Korynta shows off the crankie box she built which, when the flaps are shut, resembles an envelope.

Visual storyteller: Laura Korynta is the final Hinge Arts artist in residence for the Summer/Fall 2019 cohort. She is a visual artist with a unique focus on visual storytelling including puppets, dioramas, paper sculptures and crankies.

Moving pictures: Korynta shows off the crankie box she built which, when the flaps are shut, resembles an envelope.

Laura Korynta starts her self-introduction by saying, “I came to art in a really unconventional way.” Korynta went to school at St. Cloud State University for linguistics and teaching ESL before becoming a teacher. She loved art as a child, but it took awhile for her to re-embrace her passion as an adult and today, although she has returned to teaching ESL and art, she’s continuing to work on her artistic skills through the Hinge Arts residency program.

While working as a teacher, Korynta met artist Malia Burkhart and it opened her up to the artistic community in the Twin Cities and what can be accomplished with art. She came across a quote, “What would you do if you weren’t afraid?” and immediately thought, “pursue art.” So that’s what she did.

“I didn’t go to school for art, I’m mostly self-taught and took a few classes and there and then did some apprenticeships and learned that way,” she says. “A big love of mine, which actually got me into art as an adult, because I always did it as a kid, was BareBones Puppets.” BareBones Puppets is an annual event that takes place in the last week of October in Hidden Falls Regional Park featuring a pageant of giant puppets and performers. Kroynta had volunteered as a performer in the past, but decided to try her hand building a puppet in 2017. With no experience in building a puppet of that size, Korynta set to work figuring everything out herself. Unfortunately, she was told what she was building wouldn’t work, it would be too easily destroyed by the elements and the need to fold and pack it every night. Instead of giving up, she adapted her idea and created an amazing, huge glowing tree.

BareBones Puppets set her on the road to a variety of large artistic endeavors-- creating a float for the annual MayDay Parade in Minneapolis, working on the Beyond the Box program from Minnesota Fringe and then starting her own artist collective. “I noticed that there was a lot of women I was encountering who had really good ideas but didn’t have an audience and didn’t have someone holding them accountable, so I started a women’s art collective and it’s called the Woppets,” she says, with Woppets standing for “women puppeteers.”

With the residency program at Springboard for the Arts in Fergus Falls, Korynta hopes to bring together all of her artistic interests and create something unique and personal. “I’ve done a lot of community art, a lot of puppetry, and now I wanted the space to be able to work on stuff that I’ve been interested in exploring,” she says, with that exploration based on inspiration she received from artist Katherine Fahey who specializes in a unique form of art called crankies.

Crankies are an old form of storytelling where a story is illustrated on a long scroll of semi-translucent paper which is then run through a crankie box, a box with a spool, crank and a light that shines on the paper, like a rudimentary animated film. “I’m really drawn to crankies because each image transforms into another image, because something will appear on the screen and then as you move it, it can surprise you and become something else,” she says.

The focus of Korynta’s crankie story is the history of the women in her family. “I want to combine the personal histories of my family onto one long scroll and explore the different stories that women in my family have. I like that it’s all on one scroll because we all have this connection with each other,” she says. “I’m incorporating these interviews that I’ve been doing and my love of puppetry and shadow shows to make what I’m making now.”

The crankie box Korynta built with help from a friend for her story, which will be painted on Tyvek, is shaped like an envelope. “I wanted it to look like a (envelope) because when I had originally been thinking about this history, I wanted it to be a letter to the women in my family and also feel like I was reading a letter that they wrote to me,” she says.

Kovynta hopes to present her crankie at a workshop at Kaddatz Galleries Studio K on Dec. 18 from 5 to 7 p.m. After that, she’s not sure what will happen to it, aside from a desire to display it at a cabaret in January. “Because a lot of it has to do with healing, I would like it to be in places where people feel like that would be beneficial for them,” she says.