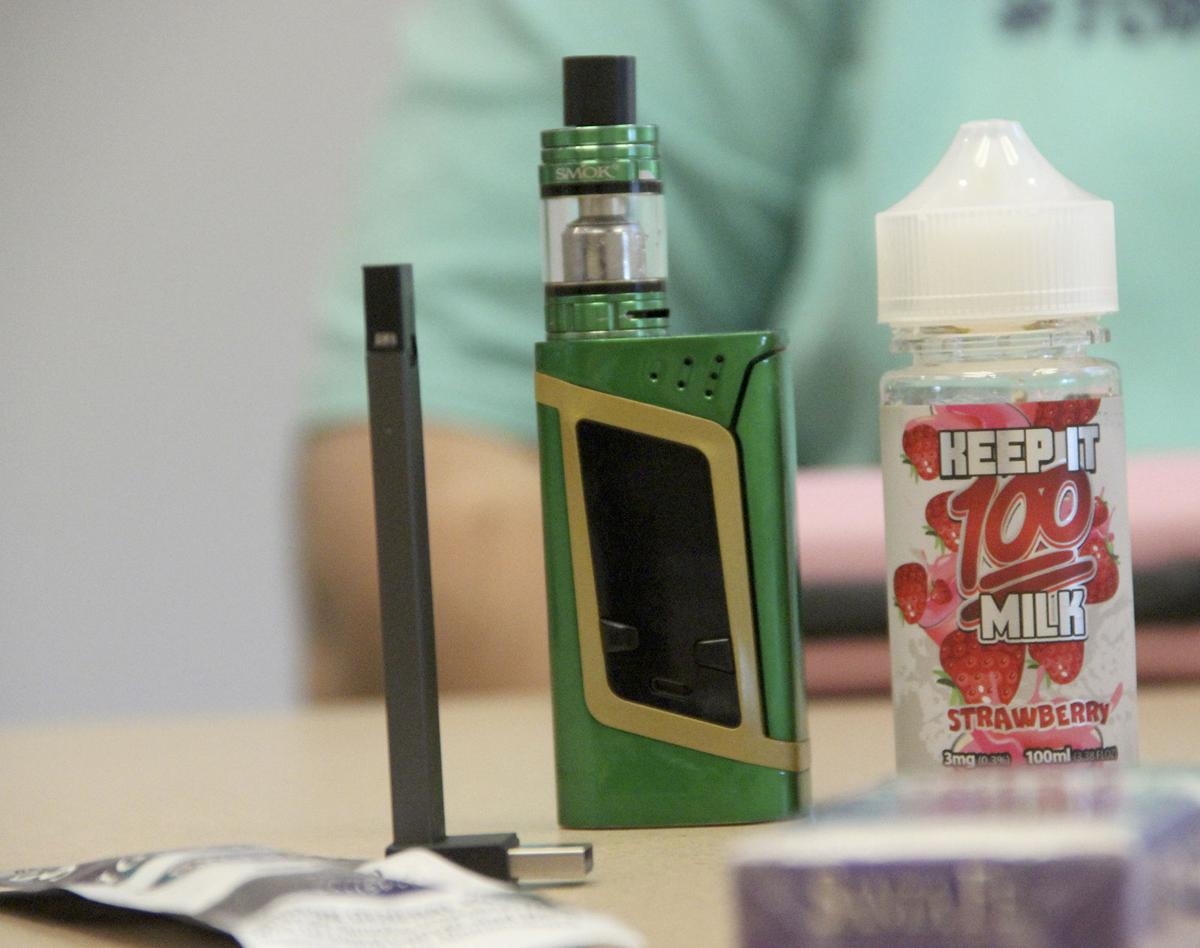 A big debate: Vaping items and cigarettes are displayed. Otter Tail County will hold a second public hearing Monday at 7 p.m. at the Government Services Center in Fergus Falls. 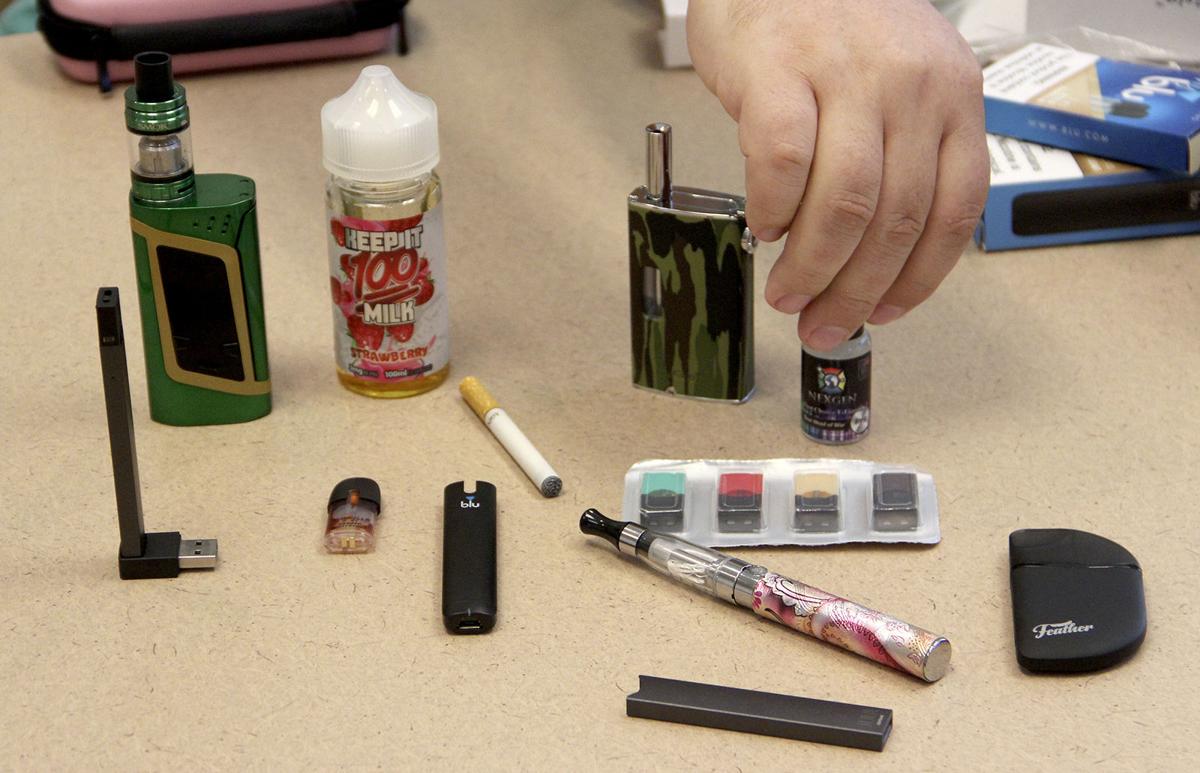 A collection of products: A display of several items that are used for both tobacco and vaping use.

A big debate: Vaping items and cigarettes are displayed. Otter Tail County will hold a second public hearing Monday at 7 p.m. at the Government Services Center in Fergus Falls.

A collection of products: A display of several items that are used for both tobacco and vaping use.

Otter Tail County is considering implementing an ordinance that would make it illegal for sellers of tobacco and nicotine products to sell to those under the age of 21 in the county. The county commissioners held a public hearing on Aug. 14 and will have a second one on Monday at 7 p.m. in the Government Services Center at 560 Fir Ave. in Fergus Falls to hear the public’s opinion on the potential ordinance.

In support of the Tobacco 21 ordinance is tobacco prevention coordinator serving Becker, Clay, Otter Tail and Wilkin counties, Jason McCoy. McCoy has helped organize a large group of those in support of the ordinance including high school students Chase Strube and Julie Swanson and U.S. veteran Keith Lillis. Many doctors and medical professionals from the county have shown their support including those from Lake Region Healthcare, the hospital and health-care system in Fergus Falls.

“For me, I was definitely nervous about it, I’ve never done something like this before, but once I thought about what it meant for our community, for especially the students at Kennedy I felt inclined to be a part of it and help that community,” Strube said.

The county first proposed the ordinance after many reports of increased usage of e-cigarettes and JUUL devices in high schools and middle schools within the county. Students under 18 are believed to get cigarettes and vaping materials from friends who are 18 or older. Moving the age to 21 and older will remove some of this access as high school and middle school students tend not to have friends who are 21 or older. Assistant principal of Kennedy Secondary School Sean Thielke says last January the school’s administration started getting reports of increased vaping in classrooms, bathrooms and buses.

“The schools were seeing this explosion of vaping and JUUL use and as they reached out to public health and said ‘What can we do.’ We did our research on what kind of ordinance could help and we brought that as a suggestion to the county commissioners as a suggestion,” McCoy said. “The commissioners liked the idea of T21 and so they had us craft an ordinance.”

Lillis heard about the Tobacco 21 ordinance from his niece and decided to get involved because of his days with the military and the impact he saw cigarettes had on his fellow soldiers.

“I spent years in the Army like I said I was in the Army and I saw fellow soldiers hacking and coughing at night and they were smoking in the barracks and it affected all of us,” Lillis said.

“I say that if parents don’t raise their children than the community has to.”

“T21 laws remove access to harm reduction products,” Hoban said. “A lot of people who start smoking before 18, switch to vaping and then before they are 21 quit smoking or even quit vaping.”

Criticism of Tobacco 21 for Price and Hoban is focused on a few issues, the main one being they believe that vaping helps those who use tobacco quit and that nicotine on its own is not addictive. Price and Hoban say they would be supportive of a Tobacco 21 law that excluded vaping, they believe that excluding vaping will push more people toward smoking and prevent people from getting to products that could help them quit smoking.

The other main claim made by Tobacco Harm Reduction 4 Life is that those trying to implement Tobacco 21 laws are financially motivated by pharmaceutical corporations attached to nicotine cessation products such as patches or gum.

“This isn’t about reducing tobacco use, it is a reduction of harmful products,” Price said. “It always comes along with a flavor ban. E-cig and vaping have a 70 percent success rate for smokers. They want to get rid of vaping because it takes away revenue from patches and gum.”

The city of Fergus Falls has shown support for the Tobacco 21 ordinance. The city of Perham is one of the only cities within Otter Tail County that has pushed back against the proposed ordinance issuing a letter of protest. The city is supportive of the concept of the ordinance but is concerned with accepting responsibility for enforcement compliance checks for Tobacco 21.

A second public hearing will be held on Monday, Aug. 27 at 7 p.m. at the Government Services Center in Fergus Falls.