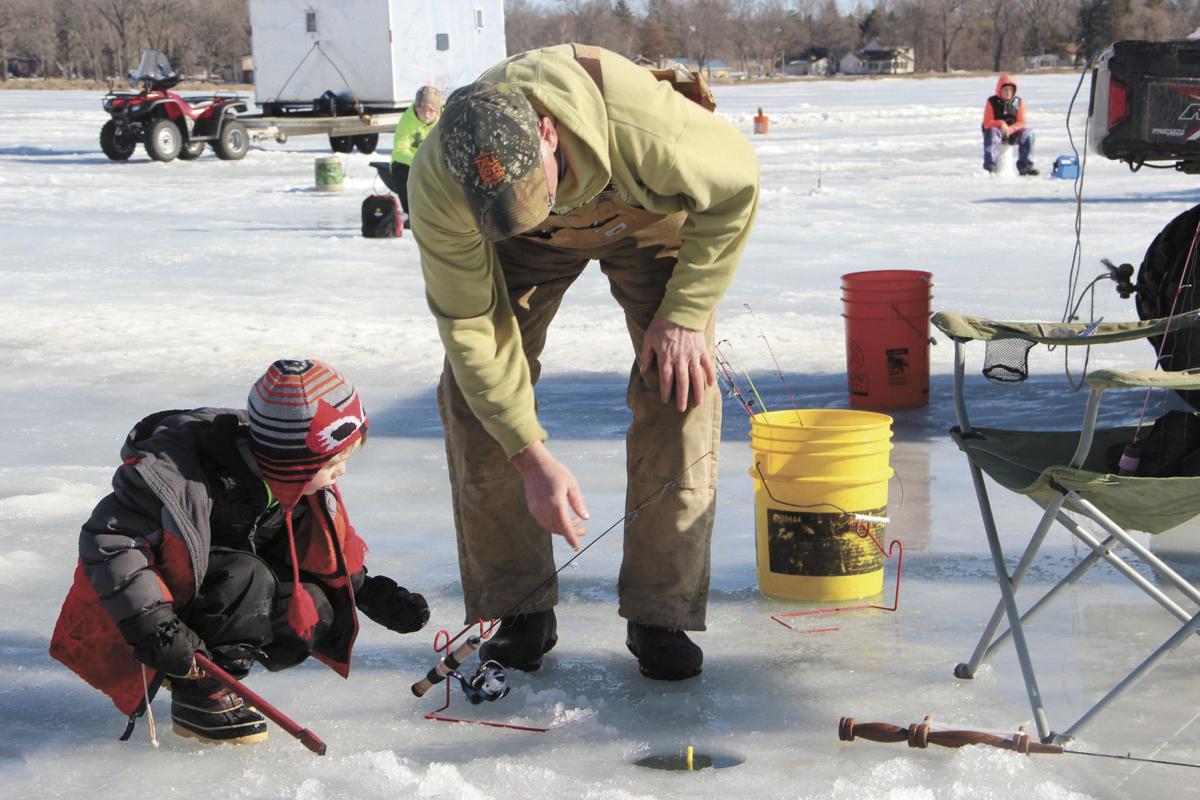 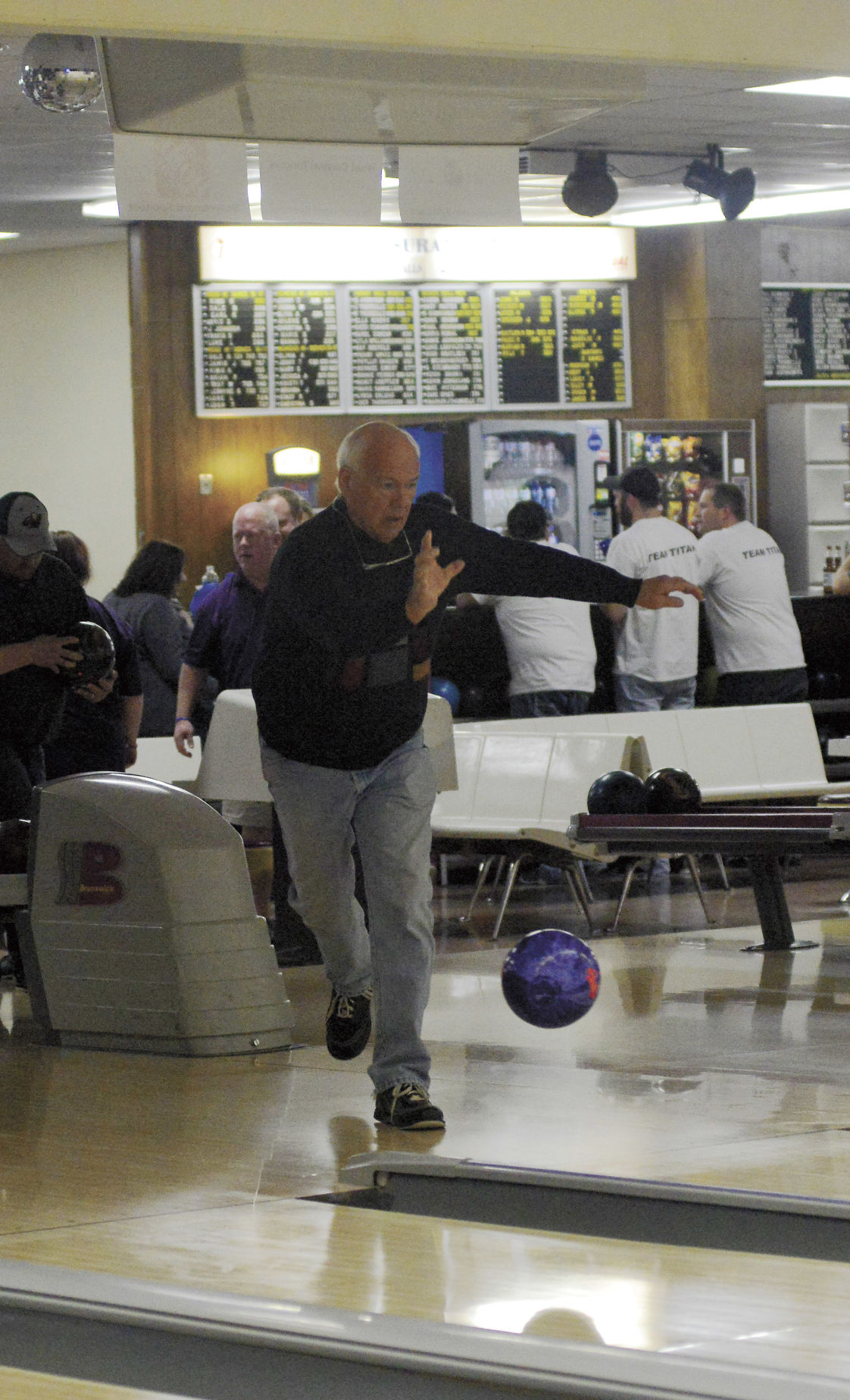 At last year’s Chamber’s Battle of the Businesses Bowling Tournament, many businesses competed against each other. Daily Journal File Photo. 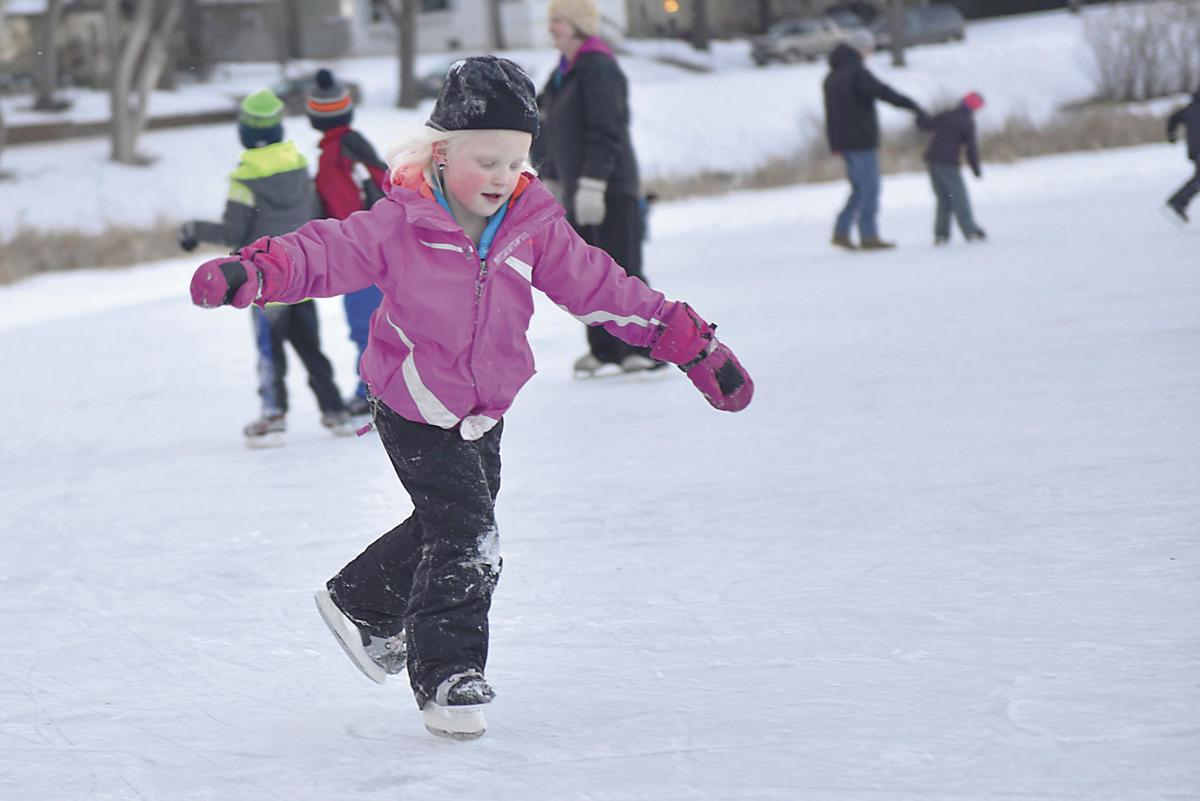 During Frostbie Festival in 2016, Brinly Shol skates around the ice solo on Thursday at Lake Alice. Daily Journal File Photo. 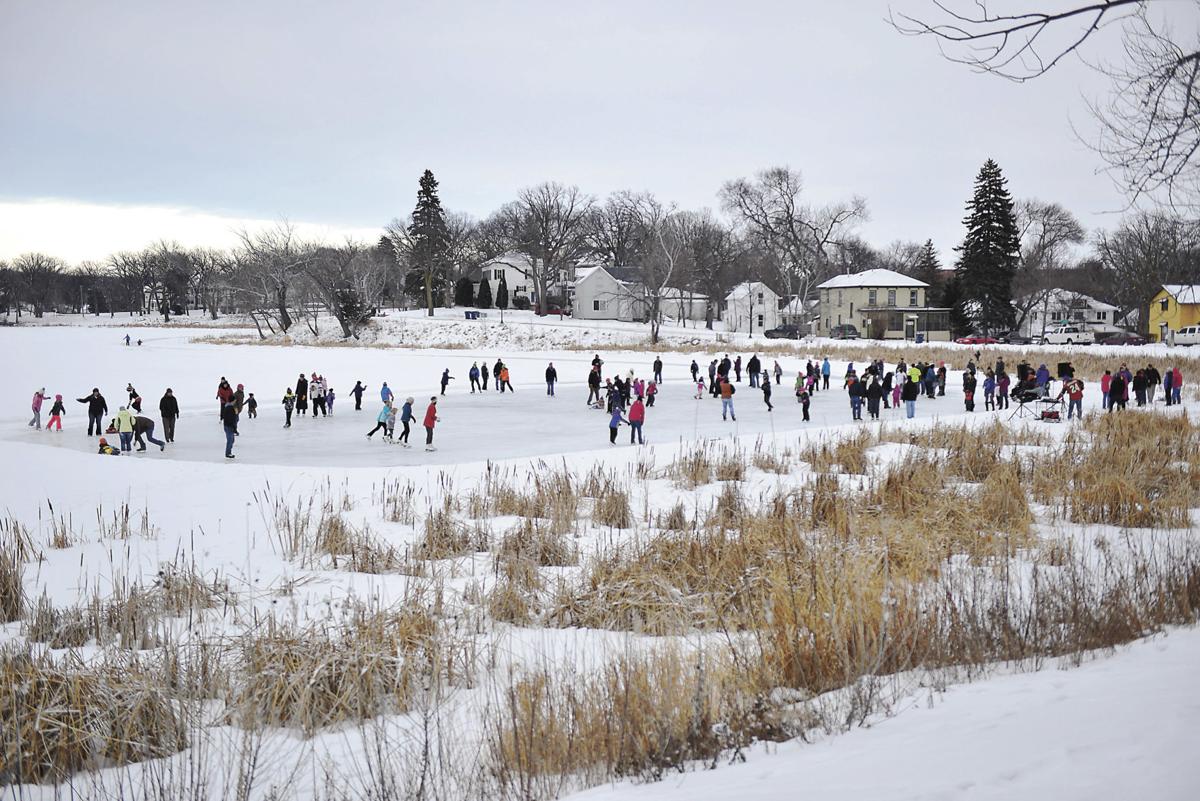 In 2015, WCCO invited Fergus Falls out to Lake Alice for their “Goin’ to the (Frozen) Lake” series on Thursday afternoon. During Frostbite Festival, Lake Alice is open to skaters galore. Daily Journal File Photo. 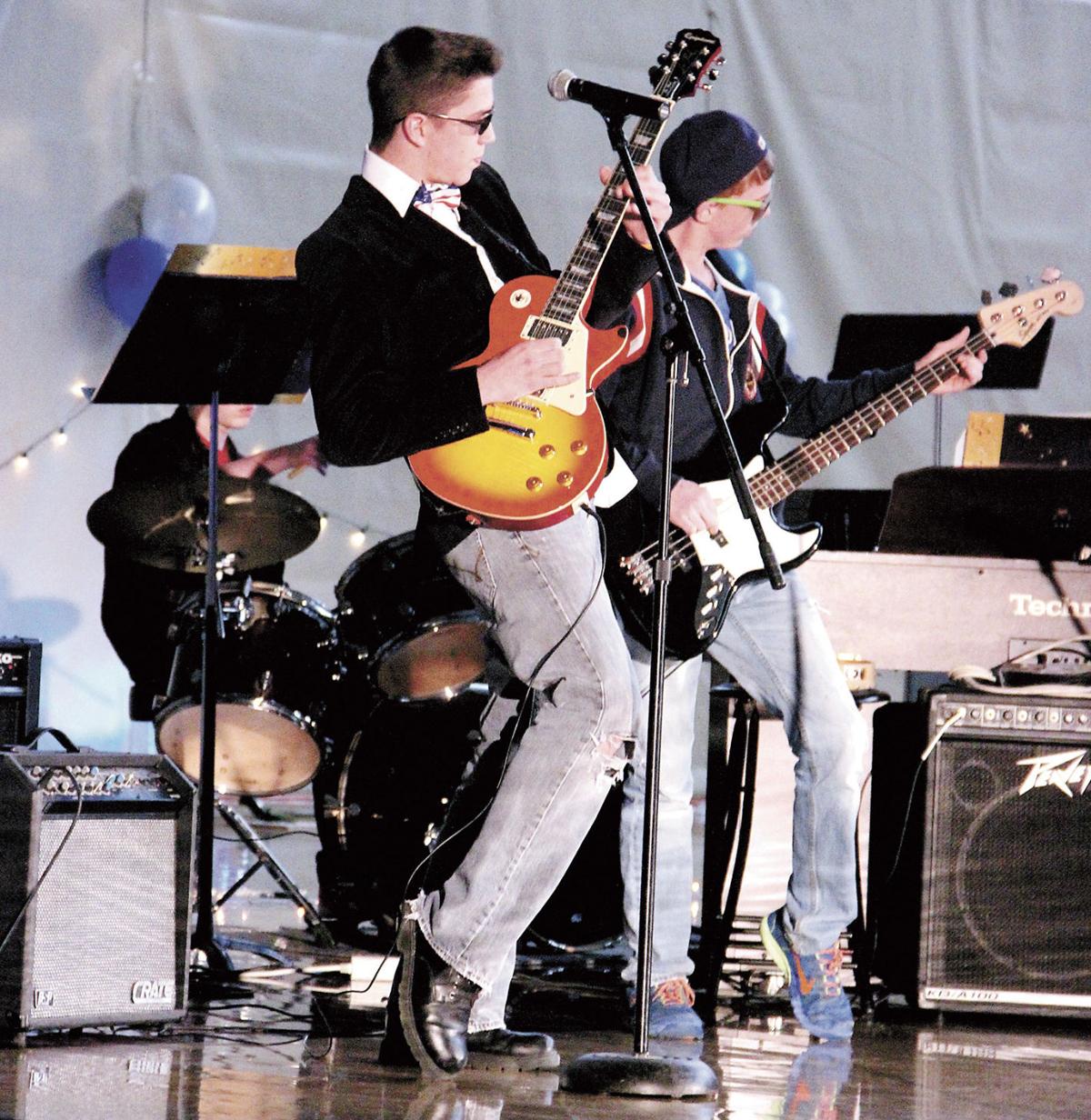 Luke Newkirk on the drums, Tommy Bowman on lead vocals and guitar and Jack Nelson on vocals and bass perform “Seven Nation Army” by The White Stripes during the 2015 SnoBall coronation.

At last year’s Chamber’s Battle of the Businesses Bowling Tournament, many businesses competed against each other. Daily Journal File Photo.

During Frostbie Festival in 2016, Brinly Shol skates around the ice solo on Thursday at Lake Alice. Daily Journal File Photo.

In 2015, WCCO invited Fergus Falls out to Lake Alice for their “Goin’ to the (Frozen) Lake” series on Thursday afternoon. During Frostbite Festival, Lake Alice is open to skaters galore. Daily Journal File Photo.

Luke Newkirk on the drums, Tommy Bowman on lead vocals and guitar and Jack Nelson on vocals and bass perform “Seven Nation Army” by The White Stripes during the 2015 SnoBall coronation.

As the snow falls and the temperatures linger in the low teens, Fergus Falls businesses and community members may be starting to think about community events, tournaments and recreational activities. Frostbite Festival is coming up fast and many events, big and small, will be happening in Fergus Falls.

Lisa Workman is the president of the Chamber of Commerce and has been a part of the staff since February of 2007. Throughout those years, she has watched the Frostbite Festival transform.

“I know the Frostbite Festival has been going on for years and years and it changes every year,” Workman said.

According to an email from Workman, in February of 1958, there was the Winter Wonderland with events including a skating meet, square dance, rural-urban dinner, amateur talent show, parade, ski meet, grand ball, the coronation of Queen Snowflake and the unmasking of King Thaw. In the 1980s, Winter Crazy Days were held.

Little details on the 1990 Frostbite Festival were listed in the Chamber Board meeting minutes that Workman sifted through. As the years have progressed, however, the Frostbite Festival has always remained a festival for community building and fun.

“As a general overview, Frostbite Festival is geared toward giving residents in the Fergus Falls area things to do,” Workman said. “It’s kind of that cure for cabin fever, so everyone in the community can get out and have some fun.”

Everything from high school sports tournaments and various sized events happen during the festival. For instance, one big event Workman thinks is often overlooked is the Eagles Aerie’s dart tournament.

Jim Stras is the manager at the Eagles Aerie and he said the dart tournament started about 20 or more years ago by the Fergus Falls Dart Association and it has happened every year since. It’s a four-person dart tournament that brings in people from all over. The dart tournament this year will be happening Feb. 2 at 7 p.m. and Feb. 3 at 11 a.m.

Although attendance for the dart tournament has been down the last few years, Stras said an average of 100-150 people attend.

“It used to be quite large and there used to be two-man teams, but with darts down in the area, the dart tournament is smaller than it used to be,” Stras said.

Despite the lower numbers, Stras said the dart tournament is a lot of fun and can be for anyone who wants to join in, no matter their experience level. There are three different divisions people can join for that reason.

If anyone has a team that would like to participate in the tournament or doesn’t have any teammates, but still wants to compete, give the Eagles Aerie a call at 218-739-2523 and ask for Jim Stras.

Another event highlighted by Workman was the Chamber of Commerce’s annual Battle of the Businesses Bowling Tournament, happening Feb. 3 at Northern Aire Lanes.

“We are in the 25th year, so this is like the silver anniversary of the bowling tournament,” Workman said. “It’s crazy and just so much fun.”

Every year, a costume contest has happened in conjunction with the bowling tournament. Workman said in past years bowlers have shown up in adult diapers, dressed up as Minions, The A-Team or even as characters from The Wizard of Oz. This year, the costume theme is the ‘90s.

“This is just groups of four people that work together coming out to bowl and being business oriented, each business sponsors the teams,” Workman said.

Last year, the tournament had 60 teams compete in three different time sessions. Workman said they had to turn away almost 20 teams. This year the tournament will include 80 teams with a fourth time slot added for teams to compete in. The time slots for this year’s tournament are at 12:45 p.m., 2:45 p.m., 5:15 p.m. and 7:15 p.m.

“Who would ever think that within Fergus Falls we could pull together 80 bowling teams that don’t bowl regularly,” Workman said.

Drawings will also be occurring at the tournament, including a a turkey package for an office bowling party. There will be 15-20 door prizes at each session as well, allowing for almost every person on every team to win a prize.

“This is a trophy that changes every year and something is added to it,” Workman said. “It’s an old bowling trophy that we glued all sorts of hideous things to. So, it’s a beautifully tacky trophy.”

There will also be two custom trophies for teams to keep, the King Bob trophy, a pin dressed as a king for first place and Gutter Bob, for the team with the most gutter balls.

Workman said there are traditions that have been going on longer than the Chamber bowling tournament during the Frostbite Festival. This year, Sertoma will have its 39th Annual Ice Fishing Derby on Pebble Lake at the De Lagoon access at De Lagoon City Park. The derby will take place on Feb. 4, from 1-3 p.m.

“The fishing derby is very family friendly, doesn’t cost anything to enter and the holes are drilled by the Dark House Association,” Workman said.

There will also be free bait provided and a free raffle for kids. President of Sertoma this year, Scott DeMartelaere said every kid who shows up will walk away with a prize. Sertoma has also been selling raffle tickets before the fishing derby and will have tickets for sale for an on the ice raffle. Winners for the pre-raffle do not have to be present to win, but they do have to be present to win at the on-ice raffle.

All proceeds raised from the raffles will be used throughout the year by Sertoma to better the community. According to DeMartelaere, Sertoma will either donate some of the proceeds to members or groups in the community who are in need or add to the past donations they have made to help kids hear better.

“Our cause is hearing improvement so we provide funds to help kids hear better,” DeMartelaere said. “So, we have donated a lot of speaker systems [and other equipment] to the school district.”

In addition to the raffle prizes, those who attend the fishing derby can also win a prize by participating in a themed fishing camp contest.

“Anybody can do this and make their own fishing camp and have a theme,” DeMartelaere said. “Say it’s an igloo or fort and make your own camp.”

Sertoma members will go around and judge the fishing camps.

“They have been planning a weekend full of activities surrounding having the world’s largest NFL Championship or Super Bowl party on ice,” Workman said.

According to Workman, big tents with big screen TVs for optimal Super Bowl watching will be on the lake Super Bowl Sunday. The bands 32 Below, Aaron Simmons and the Johnny Holmes Band will be performing as well. The Otter Tail County On Ice Party will be happening Feb. 3 and 4 and  kicks off Otter Tail County’s 150th anniversary. For more information on the event, go to the Otter Tail Lakes Country Facebook page.

Leighton Broadcasting will be hosting their annual Buildcon at Westridge Mall on Feb. 3 from 9 a.m. to 3 p.m.

“Now that Christmas and New Year’s is over, people are starting to think about additions to the deck or replacing the roof,” Workman said.

Out at the Westridge Mall, contractors, builders, landscapers, designers and even people who just sell windows set up to consult community members.

For any organizations or businesses that are hosting events during the Frostbite Festival, but do not see themselves on this list, Workman said to give the Chamber a call.

“We always end up hearing about last minute things and we will post that on our website,” Workman said. “If an organization or groups are doing something for Frostbite, we are happy to promote it. … Just let us know what you have going on and we will help pitch it.”