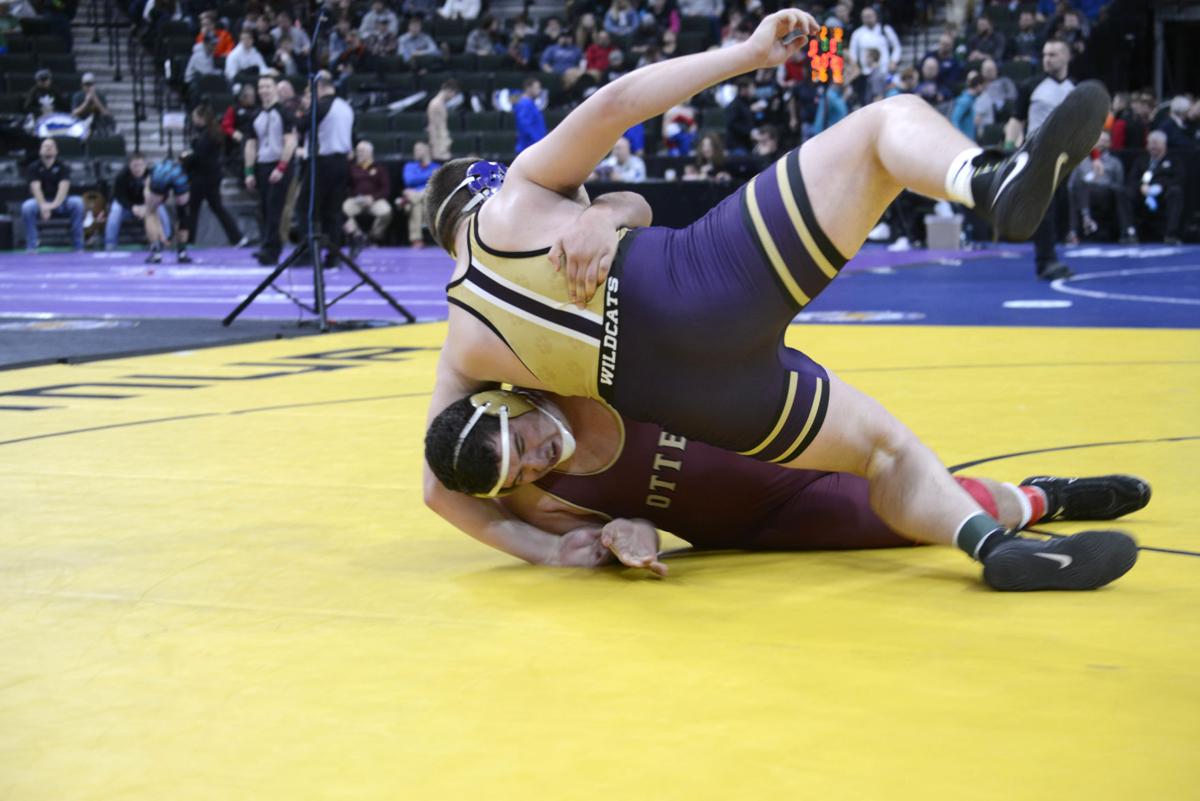 Fergus Falls heavyweight wrestler Dustin Portales secures the win in the opening round of the Class AA state tournament Friday at the Xcel Energy Center in St. Paul against Waconia’s Bennett Weber. 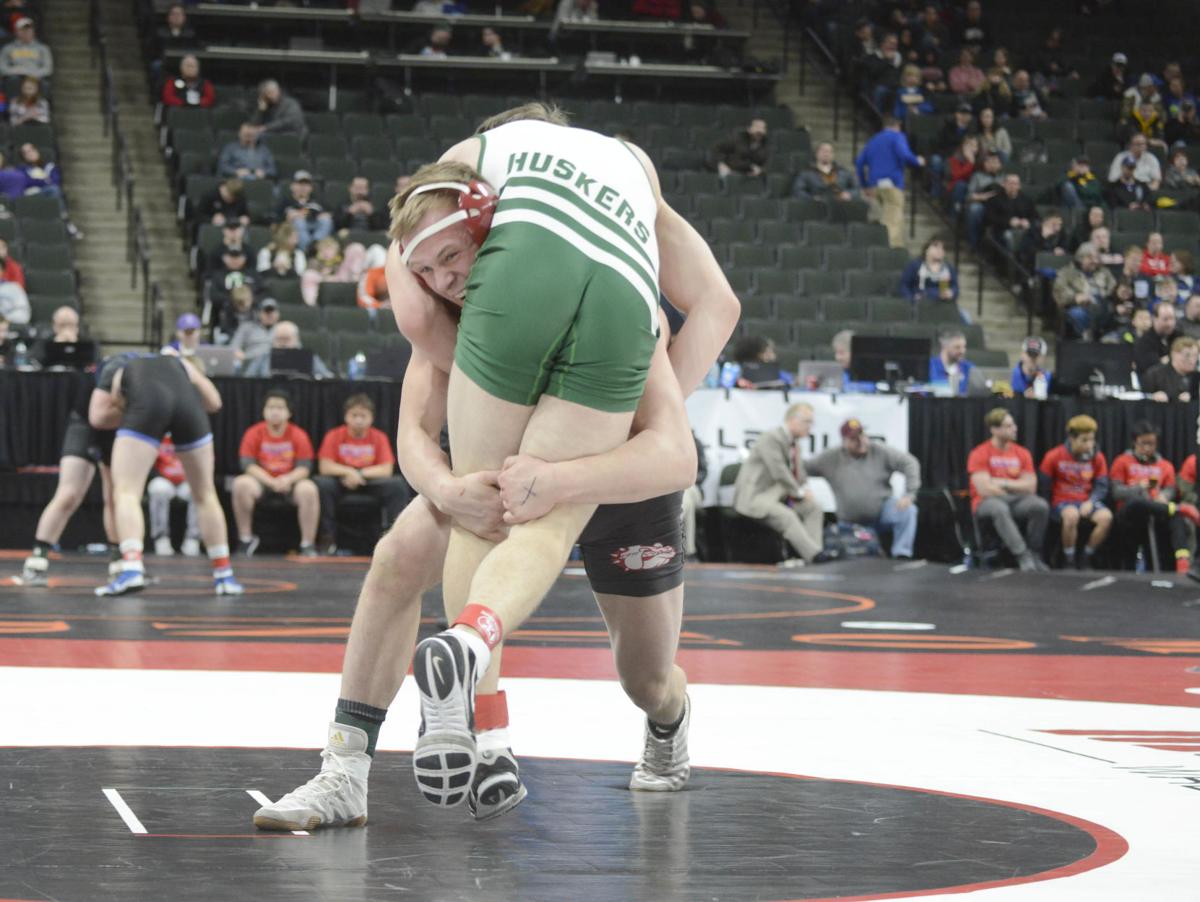 Family Tradition: Otter Tail Central Bulldogs wrestler Max Naddy hits the power-double on against HOL’s James Welle in the Class A, 145 pound division Friday during the state wrestling tournament at the Xcel Energy Center in St. Paul. Naddy would go on to win the match by 10-4 decision.

Fergus Falls heavyweight wrestler Dustin Portales secures the win in the opening round of the Class AA state tournament Friday at the Xcel Energy Center in St. Paul against Waconia’s Bennett Weber.

Family Tradition: Otter Tail Central Bulldogs wrestler Max Naddy hits the power-double on against HOL’s James Welle in the Class A, 145 pound division Friday during the state wrestling tournament at the Xcel Energy Center in St. Paul. Naddy would go on to win the match by 10-4 decision.

Portales had a tough draw in the opening match in the Class AA tournament taking on Bennett Weber of Waconia. In a very intense showdown, Portales came out victorious with a 4-3 decision and followed with a 12-3 major decision over Orono’s Shea Albrecht in the quarterfinals..

Portales will now take on Logan Wingert of Plainview-Elgin-Millville in the semifinals.

In Class A, the West Central Area/Ashby/Brandon-Evansville wrestling team will see one of their three wrestlers compete in Saturday’s matches as 195-pounder Wyatt Olson advanced to the semifinals.

Olson pinned Matthew Kasella of Royalton/Upsala and followed with another pinfall victory over Lewiston-Altura/Rushford-Peterson ‘s Noah Herber in the quarterfinals. Olson will take on Tyler VanLuik of Minnewaska Area in Saturday’s semifinals.

In the 126-pound division, Anthony Sykora pinned Gable Speltz of Lewiston-Altura/Rushford-Peterson, but fell in the next round to Brett Willaby of Windom/Mountain Lake by pinfall.  Sykora would end his state tournament with a loss in the consolation bracket to Wyatt Lahr of Royalton/Upsala (dec. 5-0).

Jordan Lohse fell to Tagen Miller by pinfall in his 138-pound match. In the consolation round, Lohse took on Trey Fairbanks of Deer River but fell by a 5-1 decision.

For Otter Tail Central, the Bulldogs will see two wrestlers in Max Naddy (145) and Cian Buehler (285) compete in Saturday’s matches.

Naddy won by a 10-4 decision over James Welle of Holdingford, but lost in the quarterfinals to Owen Novacek of Badger-Greenbush-Middle River in an 11-3 major decision. Naddy would defeat Skye Powers of Atwater-Cosmos-Grove City in the consolation bracket by a 6-3 decision. Naddy advances to Saturday where he will take on Zach Spinks of Windom/Mountain Lake.

Buehler clipped Zach Evans of Badger-Greenbush-Middle River in a 2-1 decision. Buehler fell in the quarterfinals against Tanner Berghuis of Atwater-Cosmos-Grove City by pinfall, but rebounds with a win over Quintin Arndt of New Richland-Hartland-Ellendale-Geneva with a 3-0 decision. Buehler will now take on Clayton Luthe of Grand Meadow/Leroy-Ostrander/ Southland Saturday.

At 132 pounds, Logan Schleske defeated Norwood-Young America’s Joash Lord  5-3 in an ultimate tie-breaker. Schleske would fall in the quarterfinals to Taylor DeFrang of Dover-Eyota by a 7-4 decision. Schleske would end his time at the tournament with a 6-1 decision loss to Teddy Pesch of Minneota.

In the 152-pound division, Nik Gardin fell to Alex Borsgard of Windom/Mountain Lake by pinfall and took on Dover-Eyota’s Marcus Otomo in the consolation bracket. Otomo would defeat Gardin by a 13-0 major decision.

Rounding out the Bulldogs, Laredo Bugbee (113) fell in a 9-1 major decision to Cael Bartels of Chatfield, and Wyatt Thorson (220) fell to Nick McCabe of Caledonia/Houston via pinfall.

Representing Pelican Rapids, Matt Ziebell defeated Tristyn Ferguson of Red Lake County Central by a 15-3 major decision in his opening 170-pound match. Ziebell would fall by a 7-4 decision to Ian Frenzel of Blackduck-Cass Lake-Bena in the quarterfinals, but defeat Gabe Pesta of Long Prairie-Grey Eagle-Browerville in a 3-2 decision in the consolation bracket. Ziebell will now take on Shawn Buysse of Minneota Saturday.

The tournament will begin again at 9:30 a.m. Saturday with the consolation quarterfinals at the Xcel Energy Center.